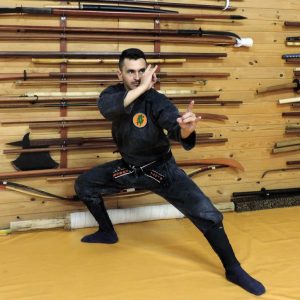 Marcio started practicing the Bujinkan martial arts in 1999, at first, he didn’t have a direct teacher. He was part of a local Bujinkan study group, and he received training from many different Bujinkan teachers from various countries.

In the year 2000, the group decided that Marcio would be in charge of the study group, and he started seriously thinking about traveling more to improve his knowledge in the Bujinkan martial arts.

In the year 2011 Marcio passed the 5th Degree Black Belt Sakki Test. Quickly rising through the ranks due to his hard training and extreme dedication, he then received the rank of Judan or 10th degree black belt in Japan in the year of 2013. He received his Judan directly from Daishihan Noguchi Sensei at the Honbu Dojo.

Marcio is currently a 15th Dan Dai-Shihan and he teaches Bujinkan Budo Taijutsu in the city of São Paulo, Brazil.

Marcio was one of my first picks for a guest instructor for the Noguchi Taikai. His amazing videos and posts on social media have caught the attention of many of the Bujinkan “old timers” both internationally and with the Japanese masters. He is very well known for his high level of skill and dedication to the promotion of the Bujinkan Dojo. He is also a practitioner of the Kuroda school of the “warrior dance” and will honor us with a short performance. This Kuroda school of dance happens to be Noguchi Dai-Shihan’s favorite. We look forward to what Marcio has in store to share with us at this event!