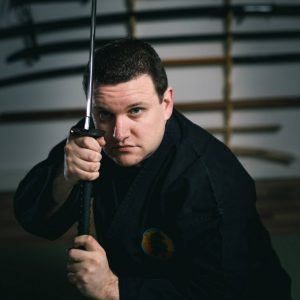 Alex started the Bujinkan martial arts in Ireland in 1989 and spent most of his formative years training with Steve Byrne in Dublin before meeting Hatsumi Sensei and Noguchi Sensei for the first time in 1997. That year he attended the Paris Taikai (organised by Arnaud Cousergue) and the experience made a deep impression on him. When the opportunity came up to go to Japan in December 2000 for the Daikomyosai training event, he attended and passed the godan test directly under Hatsumi Sensei. Since then, he’s travelled to train in Noda over 40 times, attending classes with Soke and the shihan. He was promoted to Judan in 2006 and 15th Dan in 2010 directly by Hatsumi Sensei, and has received two Bujinkan Dojo gold medal awards, the Shingitai Ichi certificate and both Yushu Shihan and Dai Shihan directly from Hatsumi Soke.

Alex has taught seminars in the UK, Spain and in the USA and today, mostly teaches three times a week at the Bujinkan Namiryu Dojo in Dublin, which opened in 1998 and will celebrate 25 year of continuous operation in 2023. Three of his senior students have attained the rank of 15th Dan DaiShihan themselves.